Projects   /   Marcotte Property Development
Marcotte Property Development
Update - February 2, 2021.  Election results:  Yes votes = 662  No votes = 554.  The ‘Yes’ vote on the referendum meant that the Marcotte property will remain undeveloped for the next 5 years.  The related improvements including the neighborhood park, the splash park/aquatics area, batting cages, and improvements to roads and trails will not take place.  The ballot for the February 2, 2021 referendum vote required a Yes or No vote.

Wednesday, December 9, 2020 - There was a public meeting to discuss the Marcotte Development on Wednesday, December 9, 2020 at 6:00 PM in the Sturgis Community Center Theater.  The public was encouraged to attend this meeting to ask questions and share thoughts about the project.  Links to the FB Live event, part 1 and part 2.  Presentation Slideshow  Meeting Brochure  Additional handout on the history of public meetings and discussions.

Wednesday, October 14, 2020 -  The Sturgis City Council met to set the date for a special election on the initiated referendum.  The election date set to February 2, 2021.

Monday, October 5, 2020 - The City Council took action to rescind Resolution 2020-59 to surplus the Marcotte property.   A Special Council meeting will be scheduled to discuss the project.  City Council presentation

Thursday, July 30, 2020 - A public presentation and open house was held to explain more about the development of the Marcotte property. The developer (Dream Design International) answered questions and shared the potential site layout. The city staff was also on hand to answer questions and record comments.
Traffic Study 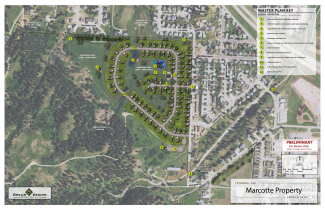 In 2011, the Sturgis City Council approved Resolution 2011-15 adopting the Sturgis Comprehensive Plan.  The plan was prepared in accordance with State Statute 11-4-3 that requires the adoption of a comprehensive plan as a prerequisite for implementing development regulations.  The plan was developed by KLJ Engineering along with support from all local government agencies, Future Sturgis focus groups, and information gathered from many public comment meetings.   The Marcotte property was identified in this plan as a key district and was identified at that time as the Game, Fish, and Parks Site (see page 112 of the plan).  Sturgis Comprehensive Plan.  The plan suggested the site be developed as a major resort with a conference center.  This suggestion was made due to the nearby trailhead leading into the National Forest.

In December of 2012, the City entered into a three-year contract for deed agreement with the South Dakota Game Fish and Parks Department to purchase 60.81 acres of land known as the Marcotte Tract for $608,100.00.  This property was located outside the city limits adjacent to Elk Road.  The property was previously used as a public hunting area, however, encroaching development by the City rendered the property no longer suitable for the purpose of hunting.  The City completed the sale in 2015 and officially annexed the property into the city limits in February 2016.  There were deed restrictions placed on the property by the FG&P while the property was in the process of being paid for.  However, once the property was paid for in full, all deed restrictions were removed.  This was a substantial and necessary investment for the City to ensure future growth.  Had the City not purchased the property, it would have been declared surplus by the state and sold at auction.  It required special legislation to allow the State to sell the property directly to the City bypassing the surplus/auction requirement.

In November of 2013, the City sent out a request for proposals to conduct a Comprehensive Land Use Plan for City-owned properties.  On February 3, 2014, the Sturgis City Council approved KLJ Engineering to conduct the Land Use Study and Plan.   The Study included four properties owned by the City.  They included a 5-acre Pine View Lot, the Marcotte, the Fairgrounds, and the potential High School property.  The purpose of the study was to learn what type of developments would be feasible at each site.  The process included several public meetings and open houses held throughout the duration of the project.  All the meetings were well attended and participants were encouraged to provide input as the plan developed.  Additional interviews took place with critical stakeholders including SD State Parks, Meade School District Superintendent, SD DOT, the National Guard, Sturgis Chamber, SEDC, special interest groups (Rodeo Club) and utility providers.  View the final Comprehensive Land Use Study.  View the presentation to the City Council.

In December of 2019, the City requested proposals for the possible residential development of the Marcotte property.  This 60.81-acre parcel is currently undeveloped.
The purpose of the request for proposals was to gain ideas for a single-family residential housing development on the property.  In addition to housing, proposals also include open space for recreational use.  Several proposals were received from developers and Dream Design International was eventually chosen as the best fit for this community development. 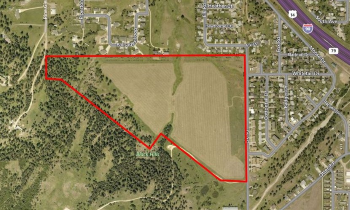 Our Mission:
To provide an attractive, growing community being served by a
professional staff that offers reliable, quality municipal services.
Website By EvoGov